Food Trend: I read an article recently listing the most popular foods of 2013 and culinary predictions for 2014. It said to say goodbye to pork belly and meet lamb belly. Though i’m not a fan of gelatinous fatty meats, I do love Lamb Chops!

Inspiration: My husband David was brave enough to make a solo Costco run last week. He called me from the meat section, and while we were discussing chicken, he found a rack of lamb, already frenched, for $12!!! Should he buy it? Absolutely!

Adaptation: Lamb Chops were actually the fist dish I ever cooked for David, so they have a special plate in our food history. I usually make individual chops on the cast iron, but a rack calls for a delicious crust. I served it with mixed mushrooms in a “secret sauce” originally developed by my mom but altered by me, and a lemon tossed Baby Arugula Salad.

To make the crust for the lamb, I mixed garlic, rosemary (from my garden that is miraculously still alive), parsley, lemon zest and olive oil in my mini Cuisinart Food Processor. You want it to have a paste-like consistency. So after my first run in the processor it was very liquidy. So I added about a tablespoon of breadcrumbs and a bit more herbs until it was just right. This can easily be a 30-minute meal. I suggest making this crust while you pre-heat the oven. 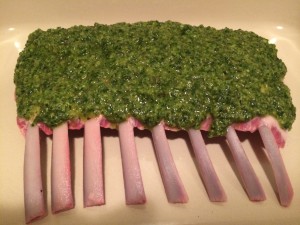 25 Minutes in the oven and Voila, dinner is ready! It’s so simple and will really impress your friends! 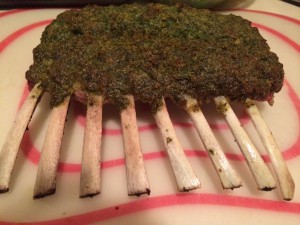 I cut the rack into double chops then served with baby arugula (simply tossed in lemon & EVOO) and a side of mixed mushrooms in a red wine and balsamic sauce. Enjoy! 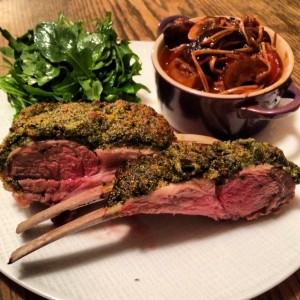